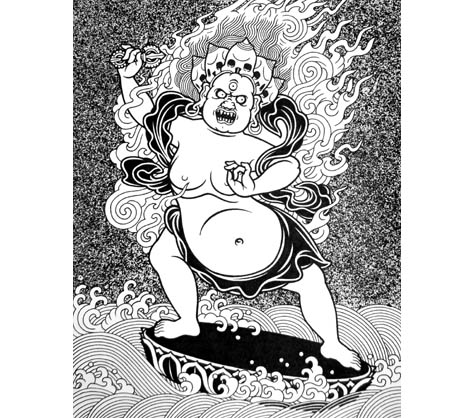 Nezha or Na Zha (Chinese: 哪吒; pinyin: Nézhā; Japanese: Nataku or Nata) is a deity, the enfant terrible, trickster, originally of Buddhist Chinese mythology, though in the West he is perhaps more well known from Japanese anime. His official Taoist deity name is Zhongtan Yuanshuai (中壇元帥) or Nezha Qiansui (哪吒千歲). Recent research traces the origine of the character to Nalakuvara.

Nezha is often depicted flying in the sky with a wheel of fire under each foot, a golden hoop, the “cosmic ring”, around his shoulder and a spear in his hands. Sometimes he is given multiple arms. Nezha is usually depicted as a youth and rarely as an adult.